Part 3 - Imbedded behind the lines at an Indian wedding

The car ride to the final phase (four) of the wedding went via the bar of the local golf club. It was a decision taken by the driver, another relative. Experience told him we would be arriving way too early. Early – India, really? The groom was set to appear at about 11.00pm and enter the venue on a horse. The bride would join him sometime after he had dismounted and been led to the stage.

This non-descript façade hid any suggestion that a 9 hole golf course was located behind it. Had someone asked me to guess what was behind this bar – guess 74 would have been ‘a golf club?’ Whisky and Kingfisher beer were on offer with tasty pre-dinner morsels. After an hour we left and arrived way too early at the local badminton centre. Yes, the location for phase four and it was only 8.00pm.


This was not any badminton centre – this was the largest, in the biggest city (Lucknow) in the most populous state of India, Uttar Pradesh. The wedding was set up in the grounds between the main road and the centre, a building that stood as high as three or four stories. Our punctual arrival allowed me ample time to survey this wedding wonderland.
Whereas the previous evening’s event was themed blue, tonight was gold. Discussion had taken place between some family as to whether it was possible to match the blue in terms of quality and lavishness. The consensus - it was unlikely. On walking in through the elaborate gold pillar entrance with fine ribbon and dazzling light, the consensus was wrong. This location, set up as it was, could be seen from Mars. 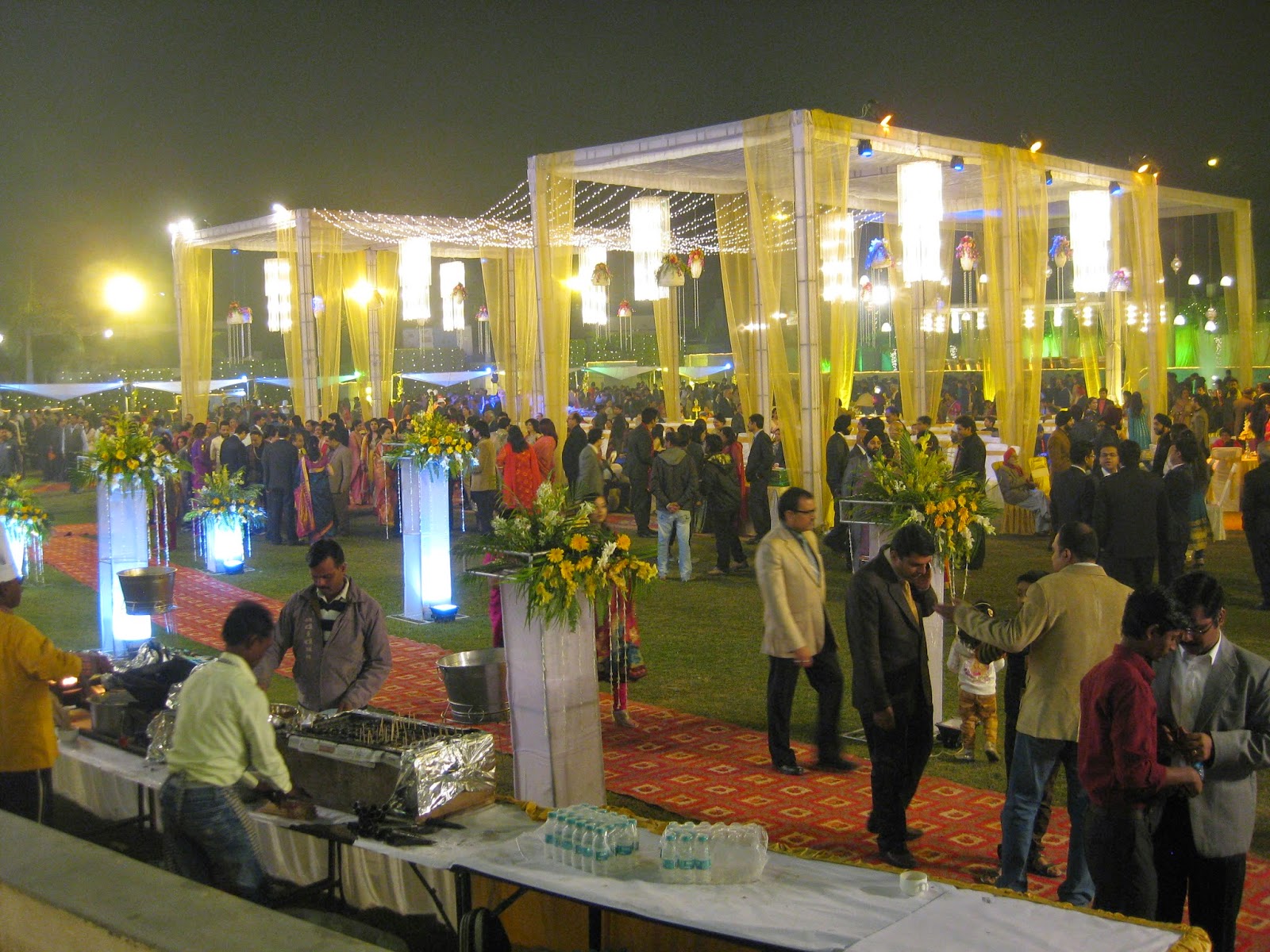 The stakes had been raised yet again. Does Indian wedding opulence and grandeur have no boundaries? Yet, singer ‘Harry’ from phase two assured me when we met again at phase three, that as impressive as ‘theme blue’ was, it only rated in the ‘average to good category’ in terms of what was possible and at other wedding ‘phases ‘ where he had sang.
The entrance stage for the couple was a replica of Persian/Mogul palace. No world leader would have felt out of place here. The almost married couple’s view, once on the luxuriant couch, would have been the dream of a young girl wanting to be a princess, the boy her prince. 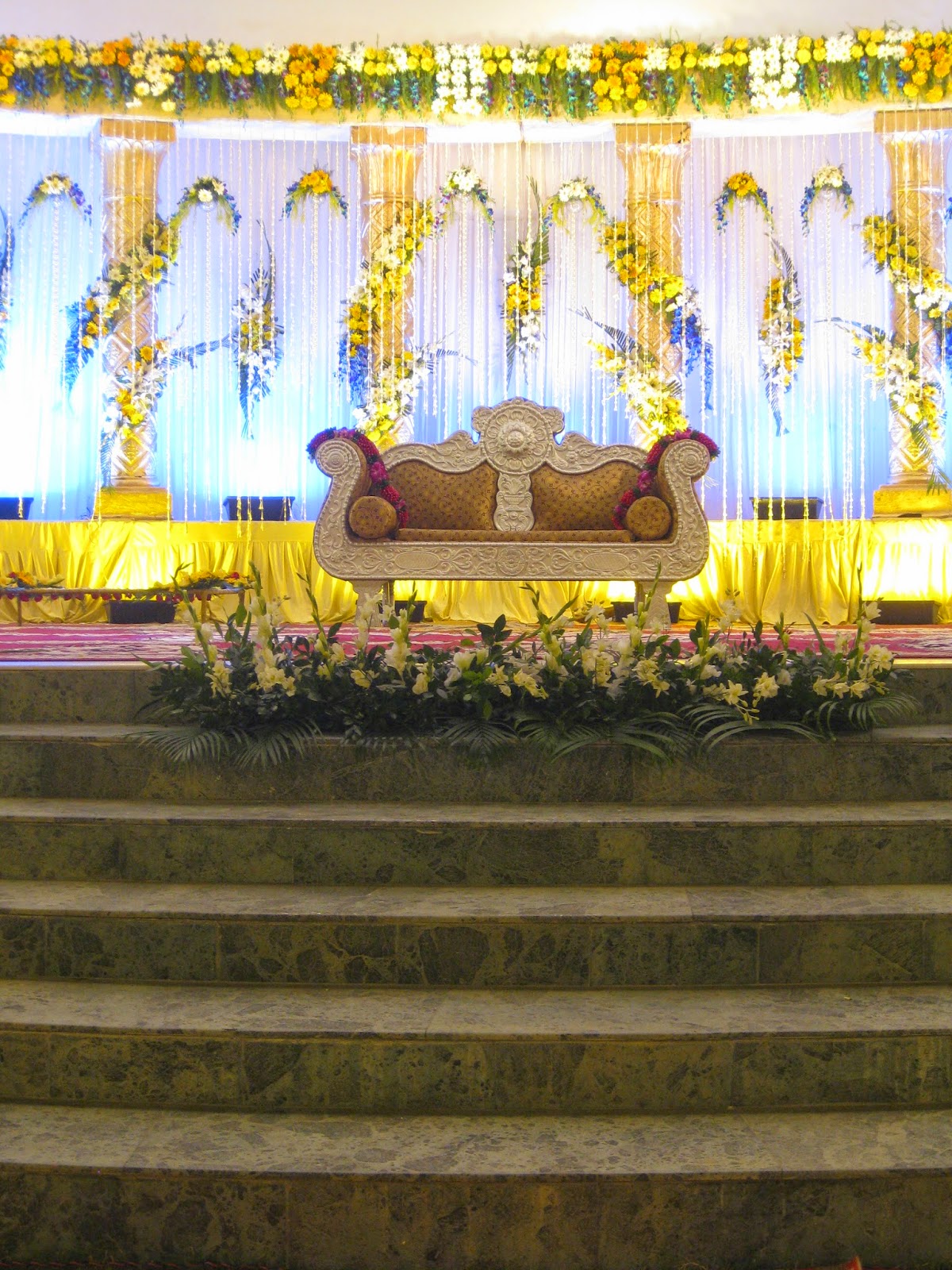 Looking straight ahead were four gold draped pergolas each standing about fifteen metres high and about thirty square metres; complemented by flowing ribbon. A red carpet made its way more than a hundred metres down the middle to a water fountain. Behind that and off to the left side were the seating arrangements for the close family dinner set to commence at around midnight. To the right what looked like the inner sanctum of the same replica palace, with carpets and more gold cloth, coloured cushions, ribbon, jewels and lights elegantly hanging half way to the floor – the place of ceremony.
With a lazy three hours to kill before the action started, I felt like a child in an exotic candy shop but one only a vivid imagination could possibly conjure. Around the sides were golden food annexes cooking up a storm from different regions of this great and diverse nation. Teenage boys had scrubbed up to become waiters attired in black suites and white gloves. They offered guests drinks, more exquisite tasting morsels and a whacky array of non-alcoholic beverages about every 24 seconds. Yes, this was a dry wedding ceremony but that was ‘inside’ the venue. Outside were the ‘car boot bars’ where those unable to refrain was alcohol would be catered for; a perfectly Indian solution.

Father of the bride had earlier sung an emotional farewell to his daughter on the stage where elite musicians were plying their trade during the build-up. Security guys doing their best ‘wild bandit’ impersonations milled around, mostly in a pack, making sure the look of thirty rifle toting men with the capacity to shoot at any minor indiscretion guaranteed good behaviour. It did! Mind you I felt no threat until I noticed them and from my perspective, they became it.


At around 11.00pm the arrival of the groom was announced by music, lights and fireworks. A throng of well-wishers gathered and danced. Team Groom was leading the pack with its the men adorned in white silk scarves. Awaiting them, before the entrance into the badminton grounds, were the red scarfed men of Team Bride. In front their gorgeously resplendent, saree sparkling women began mixing with dancing and cheering compatriots from Team Groom; a swirl of colour and movement in front of the groom bearing horse. Both families came together in a delirium of moment and occasion fuelled by adrenalin, emotion and the celebratory beating of drums. 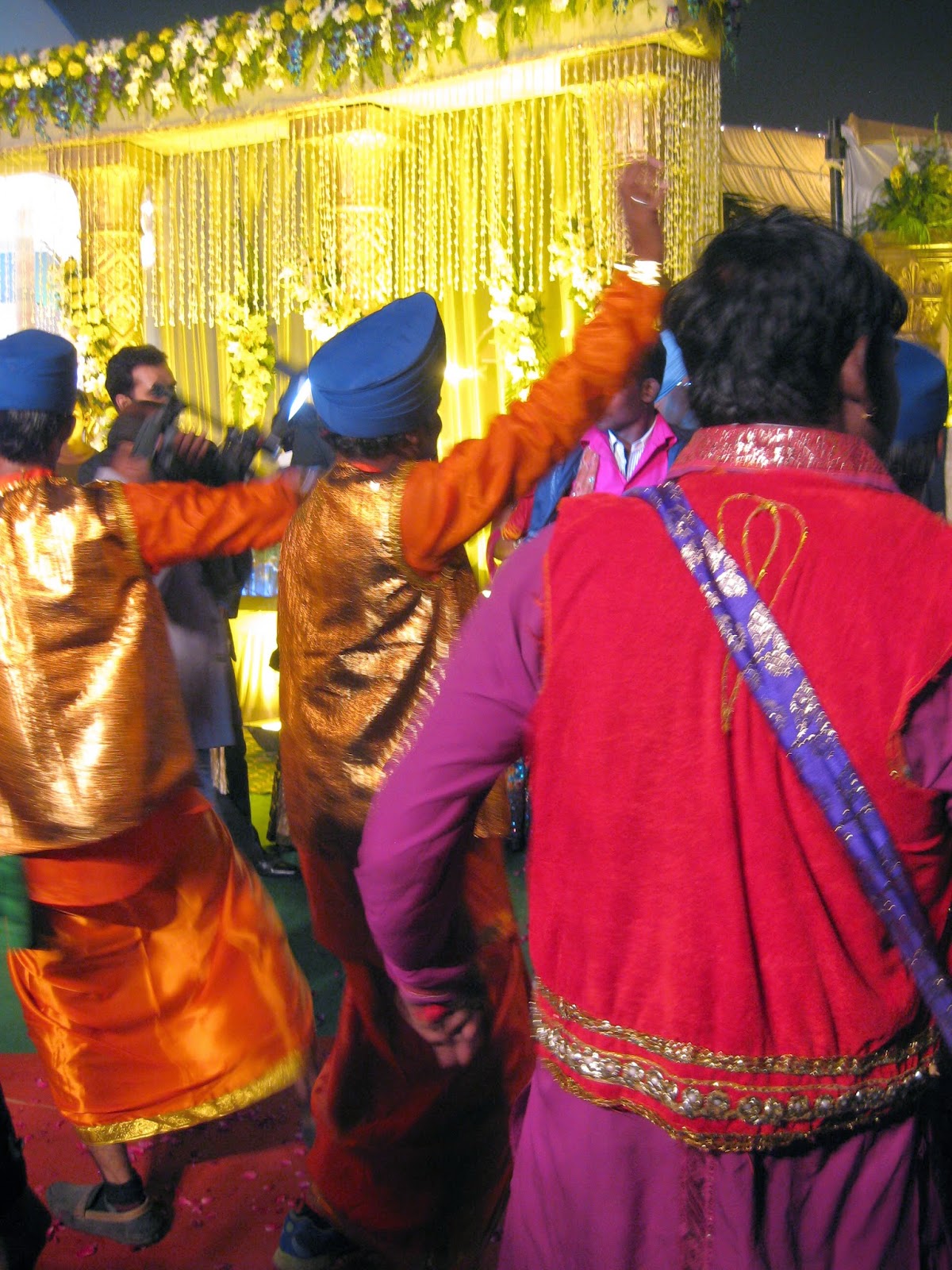 The groom dismounted and dressed, maharaja like, entered the stage where he would spend time greeting well-wishers and being photographed by the assembled media pack. Sometime later the equally well adorned bride entered from stage left with what I expected would be great fanfare. Instead, accompanying her were just a few of her closest male family in a low key approach. Together the couple met many guests.


A quick glance suggested the anticipated 1,200 invitees were indeed all here. Food was flowing and the place was pumping. The salad bar featured animal and bird figures delicately carved from enormous pumpkins. I had awoken from a dream; into a dream.
How time flies! It was past 1.00am and only the inner core from both families remained in a picnic like atmosphere to watch a Hindu priest prepare concoctions, chant holy mantras and ask the couple to recite prayers of guidance and spiritual connection. 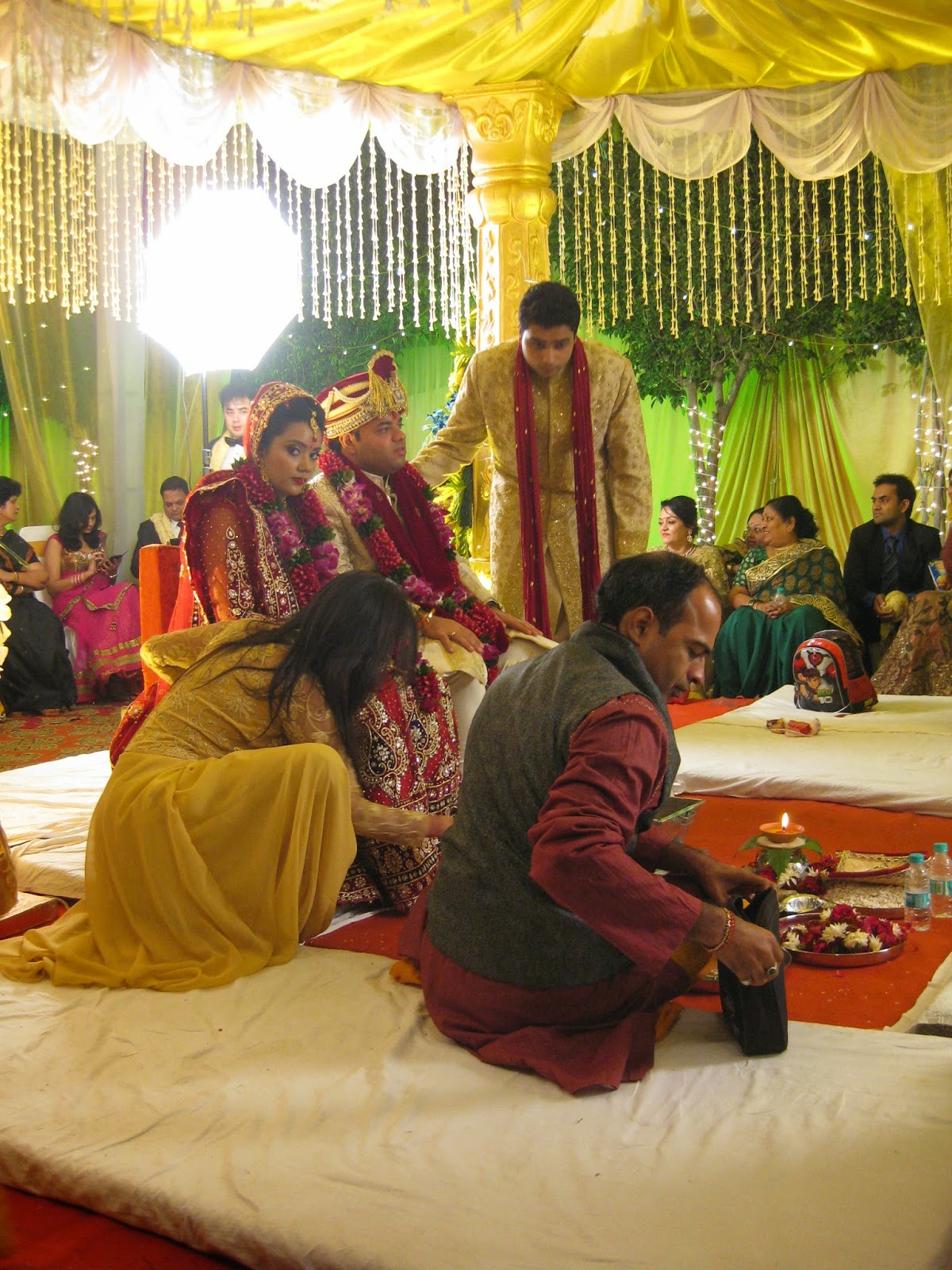 Many of the 1,200 were making their way out as the grounds started to resemble the end of a large sporting event. The clean and pack up crew were already on task as the ceremony continued.
As it concluded a solid hour later, more subdued rejoicing and mixed emotions from the proud parents of the bride, for she was switching places to join Team Groom.


The now (finally) married couple made their way back to the entrance; soon to be driven to the groom’s family home where they would spend their first night. Next day would also be there but the day after would entail a ritualistic return to the bride’s parents’ home for lunch. Then it was honeymoon time in Bali.
The remarkable host (the bride’s father) was generous and hardworking to the end arranging, as he was, for all the guests to be driven home. Casual workers then approached him for tips. His wad of rupees lightened significantly as he recognised jobs well done.


At around 3.00am, having experienced an overwhelmingly joyous wedding, we were whisked away into the still mild Lucknow night. The roads were almost clear. I was momentarily tempted to ask the driver if I could get behind the wheel. The white Brahmin cow that ghosted from nowhere was as nonchalant as it would be in peak hour - which was pretty much all other times.
I swear the ambling beast winked at me. I pinched myself.